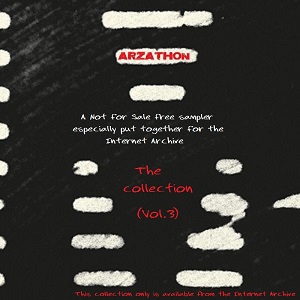 Arzathon an Audio Artist who has been recording and creating Audio Art since the late 70's. He has recorded with many artists from the world of Audio Art and Experimental Music. Some of his projects have featured on Radio shows around the world. Trolls on Acid with Phil Ogison. Dreamtime Troubadours with Don Campau & Kristianne Gale. Heavy Metal Vampires on Nuclear Waste with Brian Fowler, P.Kaa, Belinda Subramen, Phil Ogison - As Arzathon, he has featured such artists as Bret Hart, Eric Wallack, Amy Denio, Ken Hyder, Greg Segal, and many others

Audio is generally created for live performance or scoring for visual art. While those traditional audio creation forms are wonderful there are naturally occurring limitations allowing audio sculpting to impress in its own way.
Audio sculptors are free to focus solely upon carefully sculpting audio in their studio in a natural way. Without coerced premature deadlines to meet other needs, an audio sculpture is truly done when it feels done by the sculptor. That allows an audio sculpture to be refined to a degree of sonic detail beyond (if not well beyond) the result provided by any other audio creation method, so allows the listener to be rewardingly immersed in (perhaps far) richer audio textures resulting in a deeply impressive sonic environment.
An audio sculptor is typically a composer, producer, and engineer.
An audio sculpture may be published in a basic form (perhaps ideal for background music), but then refined further for one or more later publications inviting the listener to become more focused and immersed in a deeper listening experience.
As audio sculptures often cannot be performed live, at least in the familiar way spanning music history. The ideal public environment for audio sculptures is the Internet. As audio sculptures are always available on the perpetual globally networked "stage", unlike a performance for which you may be unable to attend, those sculptures can be accessed in their prime form at any time.
As psychedelic, especially cannabis, legality continues to increase in formal recognition, the ability to experience audio sculptures in many powerfully new entertaining forms within the comfort of your home correspondingly adds value to this audio creation method.